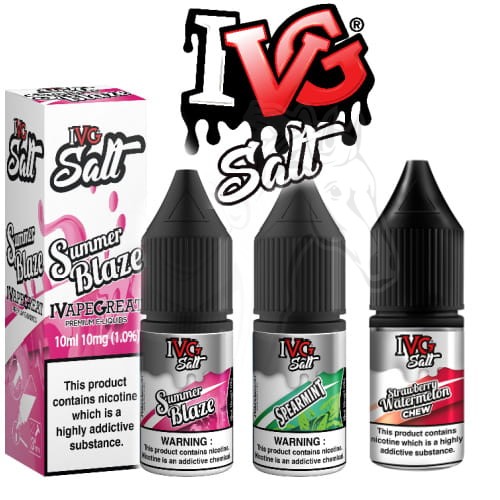 IVG is an English juice brand that has lots of great flavours. IVG Has  good reputation for good pricing and tasty flavours with great quality

Pay attention! Nic salt liquids contain a higher nicotine value and are therefore recommended to be used in pod systems or with coils that contain a high Ohm value.

Not surprisingly, IVG is highly valued by many vapers. The brand has since received more than 25 awards for its e-liquid flavors.

Including an Award for 'Best British E-Liquid Brand 2019'.

Wondering if IVG's flavors are for you? Or do you have other questions about this brand? Feel free to ask them to our customer service! We are happy to help you.

Spearmint Sweets: This taste reminds you of delicious minty chewing gum from your childhood. .

Bubblegum: This is the perfect balanced sweet and fruity chewing gum

Rainbow: An insane mix of fruits make an insane taste.

Cola: Just Like drinking a can of cola. Extra refreshing Tangy cola

Blue Raspberry:  blue raspberries with a tone of fruit slushy.

Summer Blaze: It is a Blend of peach lemonade and lime peel that relax any userand create the best after taste possible

Apple Berry Crumble: This is a traditional English breadcrumb cake with apple and blackberry filling.

Strawberry Watermelon:  This is the tangy taste of fruity chewing gum made from  strawberries and juicy watermelons.

Fresh Lemonade These are freshly squeezed lemons sprinkled with sugar for the sweetness.

Cinnamon Blaze sweet andspicy cinnamon  mixed that takes us back to the chewing gum from our childhood.

What are nicotine salts?

Due to the increasing popularity of e-cigarettes, more and more people are interested in the numerous variants of liquids and products that can be vaped. These include nicotine salts, which are becoming more and more of a trend within the community. But what is nicotine salt all about and how does it affect the vape when vaping?
Nicotine salt for e-cigarettes: Special nicotine for vapers

Nicotine salts describe a new form of nicotine that was developed for vaping to make it even more enjoyable for you. Nicotine salts offer the following advantages compared to the classic liquids with conventional nicotine:

Nicotine salt simply allows you to vape higher concentrations of nicotine, while relieving the typical scratchy throat and reducing consumption. This means you have more of your liquids in the long run when you want to vape nicotine. It is precisely these points that make the salts so popular with many vapers, as the liquids are very economical and much more pleasant to vape. However, there can also be side effects when vaping, especially due to the high levels of nicotine. On the one hand, typical complaints such as headaches, nausea or dizziness caused by nicotine can be noticed more quickly. Likewise, especially with subohm vaping, an overdose of nicotine can occur within a short time, which manifests itself in the same symptoms, only a touch more intense. For this reason, sensitive vapers should be careful with the nicotine salts.

The science behind nicotine salt

Nicotine in classic liquids is an alkaline solution and is absorbed very quickly by the body. Nicotine salt is obtained from basic nicotine by adding an acid. This turns the nicotine into a salt that can then be processed into the liquids. The nicotine becomes more acidic and now needs more time to get into the body, which is the reason for the significantly weakened "flash". However, it is precisely this slow absorption that enables the more intense effects of nicotine that so many vapers want.

Nicotine salts are particularly widely used with pod systems. The reason for this is the low power and capacity of the pods, which make it much more difficult to dispense large quantities of classic nicotine. As described above, nicotine salts are absorbed more intensively by your body, which significantly increases the actual effect. For this reason, liquids with nicotine salts are good for pods. It is no longer necessary to rely on a high capacity or performance and still experience a nicotine kick from vaping, because the liquids take care of that. However, the kick does not start faster than with normal liquids, but often even more slowly.

What are nicotine salts made of?

Nicotine salts actually consist of the ingredients from which conventional liquids are made. This means that vegetable glycerine, propylene glycol, nicotine and flavors are used, which can be of natural or identical origin. The big difference between the salts and the liquids is the use of a different nicotine, which attenuates the urge to cough even with a high nicotine content and can thus be used in the sub-ohm range. This is free nicotine. Free nicotine has a lower pH value, which strengthens the effect of the substance, but relieves side effects such as the "throat kick" and is therefore particularly recommended for beginners who want to start or switch to nicotine vaping. The low pH is achieved through the use of acids with which the isolated nicotine is broken down. In the end, you have the actual nicotine salt that can be used by the steamer. The fact that a higher amount of nicotine is released by this variant than with conventional liquid should be taken into account when using it.