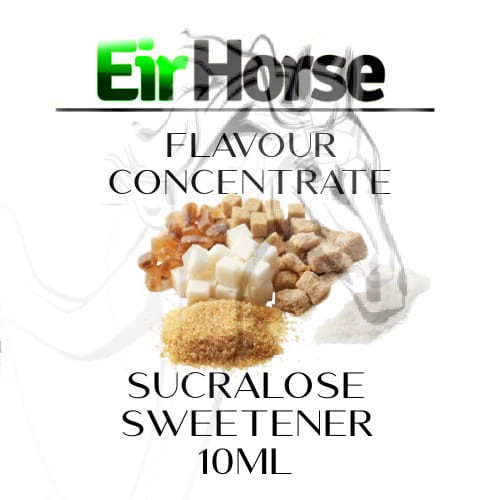 Just a drop or two of this sweetener is enough for each e-liquid to reach a new level of sweetness.
Eirhorse Sweetener, attention very sweet! Many vapers have a penchant for heavenly sweet liquids and flavors. The stimulating effect of many of these varieties is achieved by, inter alia, sweetener sucralose. Now you can create a liquid with the right sweetness yourself.

Attention
Eirhorse Fruit Elixir is not intended for vaporization without dilution.
It is a concentrated PG based aroma for mixing in DIY e-liquid.

We recommend that all DIY enthusiasts mix a test batch of Eirhorse concentrates at approximately 15%. If this dose does not meet your expectations, add 5% until you get the desired effect.

All Eirhorse concentrates are based on PG.

It should not be vaporized without dilution.

Store in a cool, dry, dark place away from other food, children or pets.

Made in the EU

When mixing the liquid, we recommend that you use the appropriate safety clothing for this purpose.

We use the highest quality pharmaceutical and food ingredients from the EU, which guarantees that they are pure and diacetyl-free and comply with European safety standards. Each Eirhorse flavor concentrate we sell is tested by us and then bottled. Eirhorse guarantees perfect quality in every bottle.

Sucralose - What is it?

Sucralose (E 955) is a food additive similar to aspartame, also known by the brand name "Splenda". It was discovered in the 1970s at a university in London in collaboration with Tate & Lyle. The compound tetrachlorogalactosucrose was successfully synthesized for the first time in 1976. The special thing about sucralose is its enormous sweetening power, which is why the food industry likes to use the additive. Today, sucralose is mainly manufactured in the USA and has been approved in the EU since 2004, having been registered in America and Canada a few years earlier. The substance is also approved in more than 80 other countries.

How is sucralose made?

Sucralose is a purely artificial sweetener that is only industrially manufactured from refined sugar. In contrast, the substance does not occur in nature. The production takes place via an exchange of oxygen groups by chlorine atoms.

Sucralose has 600 times the sweetening power of conventional sugar, which makes it extremely economical. The sweetness sets in relatively late, but lasts for a very long time. Sucralose is also completely calorie-free, very heat-resistant and has good solubility and mixability. Some sweeteners have an unpleasant or bitter aftertaste, but sucralose does not. In addition, the substance is very gentle on the teeth. Ergo: In contrast to granulated sugar, sucralose does not trigger tooth decay. In addition, the substance is considered a suitable sweetener for people suffering from diabetes. It can also contribute to weight loss because it is not processed as part of the carbohydrate metabolism. The recommended daily dose of sucralose is 15 mg per kg of body weight.

Side Effects of Sucralose

From a scientific point of view, no clear evidence has been provided that the consumption of sucralose causes side effects. However, there are testimonials from people who have struggled with gastrointestinal problems after an overdose. If you are currently taking medication, undergoing chemotherapy, are pregnant, or are breastfeeding a child, you should consult your doctor to be sure about the use of sucralose. The sugar substitute erythritol (E968) has a similar sweetening power to sugar and is popular with dieters and diabetics with 0 calories. Effects on the stomach and intestinal flora are not known for this substance. The sugar substitute Stevia offers a vegetable alternative to sugar and also has an energy content of 0 calories.

The effects of the sweetener sucralose on human health have been researched for over 40 years. In the purest and unheated form, consumption is considered harmless for the body, provided that the specified daily dose is not exceeded. This is confirmed by the following leading scientific institutions and regulatory authorities, among others:

However, according to recent studies and investigations by the Federal Institute for Risk Assessment, the heating of sucralose can produce by-products that could potentially have a harmful effect on human health. We'll go into more detail on this below. Before that, we will tell you which foods and drinks contain sucralose and why the e-cigarette industry also likes to use the sweetener.

What is sucralose in?

For most people, granulated sugar is still the number one sweetener. But did you know that food manufacturers have long stopped using industrial sugar in the manufacture of certain products? Instead, much more efficient sweeteners are used. Sucralose is particularly popular and can be found in many products in the supermarket. The sweetener is mainly used in ready-to-eat foods that are supposed to be cheap and quick to consume. But supposedly light products for dietary nutrition are also made with Splenda, because: The sweetener is not utilized by the body and, in contrast to pure sugar, is completely calorie-free. The following products typically contain the sweetener sucralose:

Due to its long-lasting sweetening power and good water solubility, sucralose is also very suitable for baking. It can be purchased in its pure form as a baking ingredient in most supermarkets and discount stores.

Which liquids contain sucralose and why?

Liquids for e-cigarettes are available in an almost infinite number of different flavors. If you get an overview of the numerous fruit mixes, imitation snacks and dessert flavors, you quickly realize that the majority of the products are based on sweet flavors. The manufacturers rely on natural, nature-identical and artificial flavorings. If the natural sweetness of the flavors is not enough, additives are sometimes used to complete the taste profile. Producers often use sucralose for this because: It is cheap and very effective and it is an additive that has been approved by the EU and tested in the food industry. Liquids with sucralose convince with an intense and very sweet taste. However – and this is something to keep in mind – when sucralose is heated, waste products are produced (more on that later). You can tell this by the fact that the cotton in your coils gets dirty faster than usual when you vaporize such liquids. It is not without reason that sucralose liquids belong to the so-called "coil killers".

Artificial Flavors: They are 100 percent lab made and have little in common with natural flavors. Artificial flavorings usually consist of very few different ingredients.

Other sweeteners for e-liquids

You love sweet liquids and are looking for an alternative to the sweetener sucralose as a "sweetener"? Fortunately, you are not limited to just this sweetener. Even before sucralose was discovered as a sweetener for e-cigarette liquids, the flavor enhancer ethyl maltol was used to sweeten flavors and liquids. This is an organic chemical compound with a melting point of around 90 °C. The taste and smell of ethyl maltol are reminiscent of caramel, boiled fruit and cotton candy. In connection with harsh liquids, a very tasty combination usually results. Ethyl maltol is usually in crystalline form. To prepare it for use in e-cigarettes, it is fortified with propylene glycol.

Sucralose is currently the most widely used sweetener in the production and refining of e-cigarette liquids. It is cheap, easy to make and produces a strong effect without changing the basic character of the strong flavors.

E-liquids with sucralose - why is sucralose so controversial today?

In early April 2019, the Federal Institute for Risk Assessment (BfR) published a statement outlining the possible health risks of sucralose. The suspicion is mainly due to the heating of the sweetener during baking and food production. The result is based on a reassessment of the data situation of the available studies. Since sucralose also heats up when the liquid in e-cigarettes evaporate, according to Prof. Bernd Mayer, a recognized toxicologist and pharmacologist at the University of Graz, cannot be clearly stated, at least for now.

What happens when you heat sucralose

According to the BfR, when heating sucralose or sucralose-containing foods and substances, a decomposition process begins at temperatures of approx. 120 °C, which causes the substance to be dechlorinated. When baking, cooking and roasting, these temperatures are usually significantly exceeded. The same applies to the vaporization process of sucralose liquids in e-cigarette tanks. This can result in chlorinated organic compounds that could potentially have a negative impact on health.

Sucralose in liquids - how much sucralose is harmful?

Since there is still too little data for a precise risk assessment, no limit value can be set at the moment. It is currently still unclear which toxic reaction products are formed when sucralose is heated and in what quantities.

What Are the Dangers of Sucralose in Liquids?

At this point, it is also impossible to expressly comment on this. It remains to be seen whether relatively small amounts of sucralose in the fluids are sufficient to produce a long-term harmful effect during evaporation. The Federal Institute for Risk Assessment (BfR) and the European Food Safety Authority (EFSA) reassess the available data independently of each other.

The Multiple Opinions About Sucralose - What's the Truth?

The reports have led to controversial discussions in the vaping scene. Several influencers have commented on the topic on various social media channels. While some advised against continuing to use sucralose in e-liquids, others warned against excessive panic. The truth probably lies somewhere in the middle. Whether fluids containing sucralose sweetener actually pose a serious risk can only be assessed after a final risk assessment by the relevant institutes and their testing.

Even if the warnings from Prof. Dr. Bernd Mayer should be taken seriously, a conclusive risk assessment is still pending. Please consider the following: E-cigarettes are considered to be a less harmful alternative to tobacco cigarettes. Nevertheless, they are far from healthy - with or without sucralose as a sweetener in the liquids.

Our conclusion on the subject of sucralose in e-liquid

Sucralose is a sweetener that gives food, drinks and e-liquids an intense and sweet taste. Due to the unclear facts, we recommend that vapers inform themselves regularly about updates on this topic and form their own opinion. Do you have questions about a specific sucralose flavor or liquid? Then give us a call or send us an email. We're here to help.