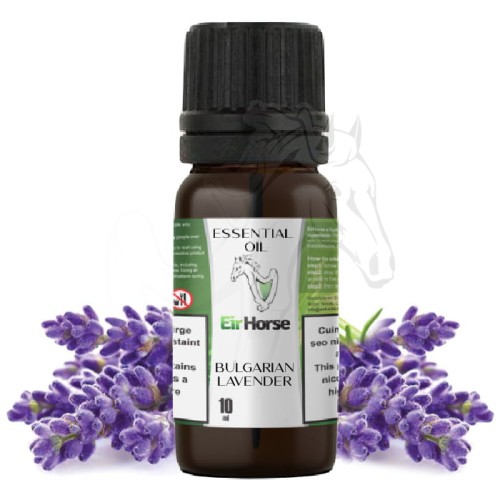 Its most important feature is its soothing effect that gives us exactly what we are missing. When stressed and in a hurry, it relaxes us, while in a bad mood it stimulates the body and spirit. Ideally suited to a lavender - relaxing massage or a relaxing aromatic bath. You will forget about the tension, troubles and stress of everyday life.

Lavender oil from Bulgaria is distinguished by a delicate, light floral scent. It has amazing relaxing properties for the body and mind. In addition, it has a bactericidal, fungicidal and insecticidal effect.

Used in skin care, it smoothes it, reduces wrinkles and reduces the overproduction of sebum.

* The oil is limited to a maximum concentration of 2% in face cosmetics, eye area cosmetics, in cleansing cosmetics, and 1% in deodorants.

How to use lavender oil?

Enrich the finished cosmetic or add it to cosmetics - Add lavender oil to a ready-made cream, face or body oil, washing liquid, shampoo or hair conditioner. You can use it in a mixture with other essential oils. Add 13 drops for every 100 ml of the cosmetic (0.5% concentration).

Add to bath - Mix 5-10 drops of essential oil (or blend of oils) in 1 tablespoon of your favorite base oil and add to the bath.

Perform a massage with oil - Add 6 - 7 drops to 25 ml of base oil (concentration 1%), e.g. almond, apricot, jojoba or coconut oil. Heat the oil blend and perform a relaxing body massage.

What to use lavender and lavender oil for, how and in what amounts?

Lavender is great for health and appearance. Both lavender flowers and lavender essential oil have healing properties. What to use lavender for, how and in what amounts?

Lavender (Lavandula officinalis) has been known for centuries as a medicinal plant. It is widely grown in many countries around the world, including Ireland. It comes from the Mediterranean region. Lavender herb has a pleasant smell, while the taste is bitter and spicy. The main ingredient of lavender is an essential oil containing up to 60 percent. linalone acetate and linalool. The plant is honey-bearing. Provence is famous for its cultivation, as is the Croatian island of Hvar.
Blooms from June to September. The inflorescences are cut a week and a half after the first flowers have developed. They have a distinctive, vivid color, ranging from lilac to strong purple, although some subspecies and cultivars may be white or pink in color. They are the medicinal raw material from which lavender oil is obtained. Lavender flowers also contain minerals, sugars, tannins and anthocyanins, which are a natural dye.

The oil obtained from developed lavender flowers, subjected to steam distillation or extraction with volatile solvents, has many benefits that a woman will surely appreciate.

The properties of lavender are used in soaps, gels, lotions and creams. Lavender, due to its antibacterial and antiseptic properties, is often used in the production of soaps, gels and foot creams.

Lavender contains exfoliating organic acids, tannins and substances that fight free radicals. Cosmetics containing lavender are recommended for oily skin, because they disinfect and refresh the skin, and reduce the production of sebum. In addition, they soothe irritations and even out the skin tone.
It is worth putting the dried lavender in a cotton bag and put it in the wardrobe with clothes. It will not only scare away moths, but also give your clothes a beautiful scent.

In states of fatigue or strong nerves, it is worth taking a lavender bath - we give 30 grams of flowers per liter of water. Lavender should first be poured with boiling water, covered and infused for 20 minutes. Drain and add bath. Such a bath also inhibits excessive sweating.

The flowers of the plant contain essential oil that is eagerly used in aromatherapy. Lavender oil allows you to relax and calm down, so it is recommended to add it to your evening bath. It can also be used for massage.

Clinical studies have also shown the beneficial effects of lavender oil in the fight against pain that accompanies many women. Extract of a fragrant plant rubbed on the forehead or temples helps to ease the "splitting in the head". Lavender oil can also soothe headaches caused by staying in the sun for too long.

Lavender oil has many uses. It consists of over 150 active ingredients, which explains its effectiveness in many diseases, from insect bites to rheumatism. Lavender extract is one of the few essential oils that can be applied directly to the skin without diluting it.

When administered orally, it works well on the gastrointestinal tract; it is excreted partly in the urine and partly through the lungs with the expired air. The volatile secretions of lavender oil (vapors) destroy pneumococci and streptococci within twelve hours.

Lavender oil can be used in many ways. It is worth applying it directly to the skin in places affected by diseases or pain. After mixing it with almond oil or olive oil, we obtain a massage mixture that will improve circulation and metabolism, strengthen immunity and relieve muscle tension.

In natural medicine, lavender oil is used for rubbing in muscle and joint pains and radiculitis, as well as for bruises, dislocations and paralysis. In Bulgaria, lavender oil is used in dentistry. It is good for inhalation in rhinitis, laryngitis and pneumonia. If you cough, you can rub it over your throat. Five drops of essential oil on sugar improves appetite and digestion, removes nausea. On the other hand, 40 drops of the oil administered three times a day on a tablespoon of boiled water have a diuretic effect.
Lavender (pure) oil can be rubbed on insect bites.

Stress, anxiety, trouble sleeping - these are ailments that many Polish women struggle with. Lavender oil is a very effective remedy for this type of problem. As scientific research has shown, its main ingredients - linalool and linalool acetate, can efficiently reduce the hyperactivity of the central system (thus facilitating falling asleep). It is enough to apply a few drops of the oil to the pillow.

Scientists have also proven the calming effect of lavender extract. During the experiments, people suffering from anxiety or excessive nervousness experienced a significant improvement in well-being. The recording of their EKG waves showed that they had achieved a state of physical relaxation and a sense of comfort. Pleasant aroma also improves concentration and helps in learning.

Bathing in a bathtub with warm water, "fortified" with 15 drops of essential oil, will help prevent colds and respiratory infections, soothe the nerves and relieve headaches and muscles.

Lavender oil is an effective remedy for skin problems. It helps to deal with acne - it destroys harmful bacteria that cause skin infections, smoothes it and reduces the overproduction of sebum.

It is also worth using it for the care of nails, especially brittle and splitting nails. It is enough to heat the olive oil and add 6-8 drops of lavender oil to it. We soak our nails in this mixture twice a week for about 10 minutes.

Lavender soap softens the skin and has a disinfecting effect. It has antibacterial properties and has a beautiful, relaxing smell and smooths the skin.

You can make a lavender mask at home. To make the lavender mask, we need: a handful of dried lavender flowers, a little boiling water, a tablespoon of flour or clay
cosmetic. Pour over dried lavender flowers with a small amount of boiling water and leave to cool. It is good to add a tablespoon of flour or cosmetic clay to the mixture, then we will get a thicker consistency. Apply the mask on the cleansed skin of the face. We wash off after approx. 20
minutes with lukewarm water. Lavender mask works great on the skin - it is brightened and redness after blemishes is reduced. It also has firming and smoothing properties - giving a rejuvenating effect.

Attention! Lavender oil is not for everyone

Some people are allergic to lavender - if we do not like its smell, it is a sign that we should not use it.

It is also not recommended to use lavender in the first trimester of pregnancy and in nursing mothers without consulting a doctor.